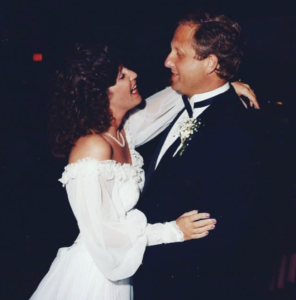 Her fears were legitimate. After all, I’d started dating at fifteen, was now 28, and hadn’t come close to that kind of commitment.

She and my father had been married for 42 years when we lost him to brain cancer. My older siblings had married and begun to reproduce right out of college. I had no desire to settle down or reproduce.

I was building a career. I worked for our PBS affiliate and freelanced in film and video production. My claim to fame during those years was hosting a live radio show called Desperate & Dateless even though I didn’t feel desperate and was dating. A LOT. I had no idea how couples stayed married as long as my parents had. Or even how someone decided to marry at all.

After losing my dad I began to think that thirteen years of dating might be enough; that sharing a life with someone like my parents had done, might be kind of cool.

But how would I recognize ‘the one?’ And where would I meet him?

I turned to visualization. (Hey, it was the eighties!)  I’d always been attracted to tall, blond, blue-eyed men so I started with that. Then I added Different. Interesting. Well-traveled. Sophisticated. And while I was not completely averse to marrying someone Jewish (and thereby making my mother deliriously happy) it was nowhere near the top of my list.

I recorded an audiotape describing the man I hoped to meet and listened to it daily. When ‘Mr. Right’ didn’t materialize, I stepped it up to twice a day. I worked on a feature film. The cast and crew included lots of men. None of them were ‘him.’

I became a producer/rep for a director-cameraman. Many males worked our shoots. Still nothing.

I was tired of the tape and about to give up when I flew to New York for a conference. I took the Carey Bus in from JFK for the first time and a blond, blue eyed six-footer got on. He introduced himself, and I noticed his accent — a unique blend of South Africa where he’d been born and Israel where he grew up.

An energy banker living in Houston, John came to New York often. He’d traveled extensively. Served in the Israeli army. He had an engaging smile, a dry wit and incredible blue eyes that glinted with intelligence and humor. He was everything I’d visualized and more.

When we arrived at Grand Central, he took in the number of bags I’d brought — he had a carry on — and hailed a cab. At my cousin’s building, he carried them up for me. We exchanged business cards.

I didn’t expect to see him again, but he left a message with my office. When I returned his call, he asked me out to dinner. I went.

A long-distance relationship ensued. It was the first time in all the years I’d dated that both parties felt equally interested. To make sure we could survive real life on a daily basis, we moved in together.

At our wedding reception, my new father-in-law told us that, ‘the first forty years are the most difficult.’ Since he and my mother-in-law had already passed this benchmark, I figured he knew what he was talking about.

Over the next thirty-four years, John and I had two sons, moved cities, made it through sickness and health. Despite all evidence to the contrary, he continued to believe that I would learn to pack light. With his full enthusiasm and support, I stayed home with our children and wrote full time. When I sold my first novel, he became my biggest cheerleader and remained so.

There were times I wished I’d included ‘romantic gestures’ in my visualization exercise. That he’d bring me flowers every now and then ‘just because.’ That he’d realize how much I loved surprises and know me well enough not to default to gift cards. Each anniversary we’d laughingly check off another year closer to marital bliss.

As anyone who’s attempted it knows, it’s hard to keep things ‘fresh’ over decades, and easy to get irritated by the small things. How hard can it be to remember to put a toilet seat down? To take out the garbage? To close a home office door while on speaker phone in the condo you downsized to and are riding out a lockdown in? To wash your hands more thoroughly during a pandemic.

Shockingly, the irritation wasn’t one-sided. As a lot of us have discovered, being stuck at home for months on end can put a serious strain on a relationship.

I was revising a novel while we were trapped together in 1900 square feet. After I killed off one character’s husband, whose faults may have resembled my husband’s, I told him it was a good thing I could take out my hostility in fiction. I joked that he was ‘lucky to be alive.’

And then he got sick. One minute he was fine, the next he went to bed and slept around the clock. He had a fever and no appetite.

My husband, who could estimate a restaurant tab to the penny and remember infinitesimal details, became confused.

He didn’t have a cough or most of the other symptoms I pored over. Covid tests weren’t readily available. A trip to our doctor showed all else seemed okay. But he was exhausted, and ‘inability to wake’ was on the Covid-19 ‘serious’ list.

I hovered. Pushed food and Gatorade. Dosed him with Tylenol. But ten days after he first went to bed exhausted, he hadn’t improved. I didn’t want to take him to the hospital. The news was filled with stories of Covid patients who never saw their families again.

There are times when I wish I hadn’t. He walked in on his own.  I sat in the car for three hours before they let me know he had Covid and they’d be keeping him for a couple nights.

Then the real nightmare began. For the first 48 hours he was able to answer his cell phone. Then he couldn’t. He got agitated and ripped the IVs out of his arm. Then he couldn’t get out of bed. Couldn’t open his eyes or fully wake. I had no way to communicate with him.

I learned when, after shift change, to call the nurses’ station to beg for information. When a doctor called, I scribbled notes hoping that capturing their words would somehow help. But I have reams of paper covered with my scrawls about oxygen levels, hemoglobin counts, and kidney function, that didn’t help at all.

They gave him Remdesivir and Dexamethasone. He improved slightly, and I told myself he was getting all the best treatments.  I dealt with my own mild case of Covid-19 in isolation in our condo while I continued to beg for information.

Twice they talked as if he might be stable enough medically to come home even though he never really woke up. Then he was in the ICU on a ventilator. They called at all hours to get permissions. Permission to give him blood. To insert ‘filter baskets’ to protect him from the blood clots that had formed. To do a CT scan. MRI. EEG. EKG. Endoscopy. I understood that every procedure carried risk, or they wouldn’t have asked.

I hate that he battled this horrible disease alone. That I couldn’t sit beside him. Hold his hand. Advocate in person. That as he was moved from floor to floor and in and out of the ICU, I had to learn how to glean from a voice on the phone, who might be empathetic enough to help me at least have eyes on him via FaceTime or hold a phone to his ear.

Sometimes when he heard my voice his limbs jerked. Twice his mouth moved, and I thought I heard ‘I love you’ and ‘I want to go home.’ But mostly I talked, telling him over and over that we loved him, that his friends were asking about him. That he needed to open his eyes and get stronger so that he could come home. Couldn’t he please just open his eyes so that I’d know he could hear me?

The briefest glimpse of the blue eyes I’d fallen in love with was cause for celebration. I told whoever was in his room how beautiful those eyes were, how we’d met by accident on the Carey Bus, how great a sense of humor he had.

This man who had once ‘filled’ any space he occupied with the force of his personality had disappeared. I couldn’t coax him out. There was no flash of wit. No dry observation. Not a single complaint.

I confirmed that I had antibodies and begged to visit him, but the hospital didn’t have a ‘protocol’ for this. Then I begged to give him those antibodies as ‘convalecent serum’ but there was no protocol for that either.

Although prayer does not come easily to me, I did my version of it constantly. In the end, my husband did not get wheeled out of the hospital amid applause from the heroic medical staff who’d saved him. Our sons and I were only allowed in the hospital when it became clear that he was dying. Only then, wearing masks and shields and paper caps and rubber gloves, did we get to hold his hand, tell him that we loved him, share family stories.

But we told them to a man whose body was a husk of what it had been just a month before. Who never roused or responded and who, in all but physical form, was already gone.

John and I were just shy of our 35th anniversary when he died. Only five more years to go before we hit the less difficult time my father-in-law had promised.

Now, our 1900 square feet is way too large and much too quiet. I long to hear his voice again, the soft blur of his accent. I wouldn’t even complain about his snoring if only we could have more time to irritate each other through the rest of this pandemic.